Remember! Postponed laying of the turf can cause the root systems to dry out!

Start layint the turf in length, parallel to the longest side of the area. The mats must be as tight as possible, but the must not overlap.

Always place the next row parallel to the previous row so that he joints between the ends of the turf sods do not share the same side. You should do it as if you were building a brick wall.

Use a harp knife to cut the turf to the shape you want. Do not step on the turf sod when laying the turf. If necessary, lay a wide board on it. Use a garden roller obliquely of the turf sods.

On sloped surfaces, use wooden pins to prevent the turf from moving before rooting.

The turf must be laid down in 24 hours. If it is not possible, you must unroll the turf strips in a shady place and water them.

The basic rooting is done in two weeks and then the turf can be used. You can have a beautiful green turf in one day if the soil is well-prepared. The turf like that is thick, with no weeds and resistant to trampling. Turf should not be laid when it is freezing. It is advised to lay the turf from the beginning of April until the end of October. 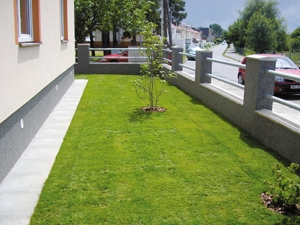 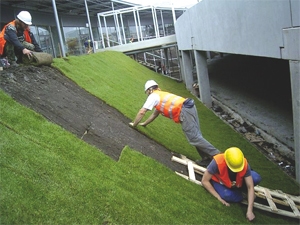